The Lighter Side of A Chaotic World.
Post Reply
1582 posts

ELK GROVE, Calif. – A Northern California elementary school teacher sent her students home for the summer with a video of class memories, only the DVD included six seconds of her having sex on a couch.

Officials at the Elk Grove Unified School District asked families of the teacher's 24 students to get rid of the DVD after the unintended clip was found spliced in a scene where children were sharing stories in class.

Johnson said the teacher, whose name isn't being released, sent the DVD home with her students from Isabelle Jackson Elementary on the last day of class Friday. She learned of the mistake after a parent called her. She then called all the parents to ask them to destroy the DVD.

The school district, located just south of Sacramento, initially sent a letter home to parents asking them to return the DVDs, but then asked parents to simply destroy them.

In a follow up to this one this is the story by the local news out here complete with video (censored)...

(CBS13) A local teacher accidentally put pornography into a DVD that was meant to be filled with school memories from the past year, and nobody caught the error until after it was sent home, shocking parents and students alike.

Parents of students who attend Isabelle Jackson Elementary said that the woman is a good teacher, but just made a mistake that may become the most embarrassing moment of their life.

The offending DVD starts with a menu screen that displays various school trips and functions, and when you click on one of them, you see kids in a classroom sharing stories. They start clapping, then the video suddenly cuts to sex.

"It goes from my son, straight to her on the couch," said 'Joe,' who saw the video along with his son and did not wish to be identified. "My son's reaction was, 'Dad, is that Ms. Defanti?'"

"We were up till midnight doing the 'birds and the bees,'" he added.

The person in the video turned out to be Isabelle Jackson Elementary fifth grade teacher Crystal Defanti.

"All she could say was that it was a horrible mix up," Joe said.

The teacher called his home the day after his child got the DVD, crying hysterically, profusely apologizing and asking the man and his wife to call every parent they knew to stop their kids from seeing the DVD too.

The Elk Grove Unified School District says they are investigating, but legal experts say it's unlikely that the teacher will lose her job.

"It's felony stupid, but it's not a crime," said defense expert Ken Rosenfeld. "Is it something that she should be disciplined for? Absolutely, but fired for? She didn't intend for this to happen."

Joe doesn't care if the teacher keeps her job, he'd just like some help from the school.

"Maybe offer some sort of counseling for my children, ask me how my children are doing," he said. "I want somebody to ask me the kind of questions my kids are asking me."

School officials say a new DVD will be sent to students once it has been reviewed.

Place your bets for what kind of hidden content will be on this version...it's the directors cut (unrated of course)

Man with two penises removes one

The things men will do to keep their girlfriends...

Ang Qiang was born with two penises but has had one of them surgically removed after his lover said either it went or she would.

'When we first started going out she was amazed but in the end she thought it was a bit creepy,' said the 23-year-old from Guangzhou.

And to top it off they included a photo of..."What surgeons removing a spare penis might look like"...LMAO I guess you have to use your imagination see below...yes that is the photo no joke other then the photo they provided

Ok this one goes down as one of the funnier titles I've seen in a while...it surely has that WTF reaction quality...for a moment I thought it was a plot line on WWE

The world of Mexican midget wrestling is in mourning after two of its most famous stars were apparently poisoned by fake prostitutes.

Brothers in armlocks Alberto and Alejandro Pérez Jiménez were found dead in a hotel room after being drugged and robbed.

The women who spiked the twins' drinks are thought to be members of an organised crime gang who pose as prostitutes to attract victims.

They normally just knock out their victims but the dose proved too much for Alberto – aka 'La Parkita' (Little Death) and Alejandro – aka 'Espectrito II'.

The 36-year-olds were veteran stars of the 'Lucha Mini' world of midget wrestling.

They began their fighting careers 17 years ago in a tag team called the Small Devils and sometimes crossed over into American WWF/WWE wrestling.

Skeleton-masked La Parkita fought at the WWF Royal Rumble showpiece events in 1997 and 1998 in a tag team alongside Lucha Mini legend and Hollywood actor Mascarita Sagrada.

At the 1997 Royal Rumble, he faced – and beat – a tag team featuring his brother, who was fighting under the name Mini Mankind.

Alejandro also fought at WWE events using the alias 'Tarantula'. But it seems their wrestling careers were the last thing on their minds on Sunday night.

The luchadors picked up the two women after filming a TV fight show and took them to a hotel, according to police in Mexico City.

But while preparing for their 'bouts' they appear to have had their alcoholic drinks spiked before being robbed.

The pair were found by cleaners at the hotel on Monday. Tests suggested they had not had sex with the women.

It is thought their size made them more vulnerable to the drugs the women put in their drinks.

Police suspect a gang known as The Leak or The Drops was involved in the incident and said 20 people were arrested for similar crimes last year.

Yesterday, there were conflicting reports as to whether the 'prostitutes' had been arrested. 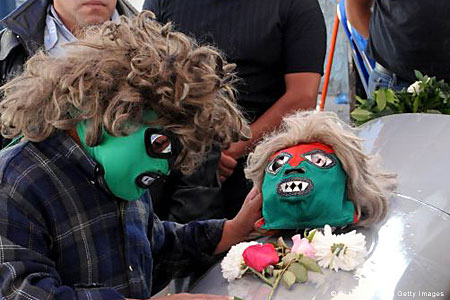 DES MOINES, Iowa (AP) - A Des Moines woman has been charged with assault and resisting arrest for allegedly throwing her dog at an animal control officer.

Police was called Wednesday to the street where 39-year-old Candy Garcia lives on a report of mail carriers being chased by two dogs. 1 of the dogs had been seized by Animal Rescue League Officer Steve Sexton, while the second one had found refuge in Garcia's home.

While Sexton was explaining the situation to officers, Garcia reportedly began yelling profanities from her porch.
After police told Garcia it was better to cooperate with police, she retrieved a dog from a closet and threw the dog, striking Sexton in the abdomen.

Police did not describe the dog, nor say if it was injured.

Information from: The Des Moines Register, http://www.desmoinesregister.com
He who trims himself to suit everyone soon whittles himself away. - Raymond Hull
Stats / Web Site / Blog

Well, this is a scan of a paper our youngest brought home the last day of school. Its a 4 page thing from the Public Library for summer reading and what not. They have different sections for young ones, middle school, adults, etc. While looking through, I might want to go to the July 19th one. lol

And I do think that would "Change" they way I cook my holiday meals. LMAO

Buga1 wrote:Well, this is a scan of a paper our youngest brought home the last day of school. Its a 4 page thing from the Public Library for summer reading and what not. They have different sections for young ones, middle school, adults, etc. While looking through, I might want to go to the July 19th one. lol


And I do think that would "Change" they way I cook my holiday meals. LMAO


LOL love it, red faces all round.
[img]http://i99.photobucket.com/albums/l287/redatomic/ClownCC2.gif[/img]
Top

Yea. I would have thought that would have been caught, either by the Library or the school. But I will say I missed it right off the bat. It wasn't until I got the the bread stuffing that I went, What? Had to go back and re-read it. I asked the wife if I could get that on Turkey day this year. I think I might be lucky to even eat now. LMAO.

Return to “The Funny Side Of The Chaos”

Powered by The Chaos